In the beginning there was a logging site, a frame saw and Einari. Now, Ponsse makes the best forest machines in the world.

Today, Ponsse Plc is one of the world’s largest manufacturers of cut-to-length forest machines. The roots of the family-owned company, grown from a machine entrepreneur’s dream into an international export company, lie deep in the Finnish countryside. The company is still based in Vieremä, in the same location in which it was founded in 1970. 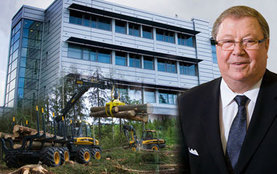 Einari Vidgrén, the son of a small farmer from Northern Savonia, started working at logging sites using a frame saw in 1957, at the age of 14. Einari was carried away by forestry and at the end of the 1960s, he developed a load-carrying forest tractor in a local village workshop. The machine was named after a mixed breed dog that roamed the village. Ponsse’s fur was a mottled grey, and it sure was an ugly dog. However, it was a persistent hunter, and you never had to return empty-handed from a hunting trip with Ponsse. When Einari drove his first self-made forest tractor out of the workshop, the villagers were amazed by the brute of a machine made from recycled parts: “What kind of a ‘Ponsse’ is that going to be?” “Now it even has a name – it’s going to be Ponsse!”  Einari decided.

The hideous machine was at home in hard logging conditions. Inspired by feedback he received from wood procurement company Tehdaspuu, Einari Vidgrén founded a forest machine factory in Vieremä village in 1970. Difficulties and setbacks characterized the early years of the factory – money was not easy to come by. During the first decade, only 50 forest tractors were manufactured at the factory. A giant leap took place in machine development in the 1980s. Ponsse became well-known to both competitors and customers in 1983 when it introduced the legendary PONSSE S15 forwarder. Built partly from aluminium, the machine frame made it significantly lighter than its competitors, putting it in a class of its own for off-road performance. The first harvester, PONSSE HS15, was launched in 1987, followed by the first PONSSE measuring devices in 1988.

In 1994, Ponsse was the first forest machine manufacturer in the world to be awarded the ISO 9001 quality certificate. This led to intensified machine development work and an expansion of the product range. When the export market opened up, the company was listed in the stock exchange in 1995. Today, Ponsse operates in harvesting markets in 40 different countries, and nearly 80 percent of its net sales come from exports.

Growing together with customers 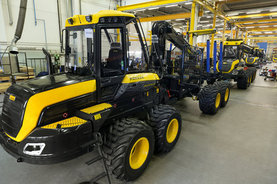 Ponsse is one of the world’s leading manufacturers of forest machines, and its customer-oriented operations are still guided by the wishes and needs of forest machine entrepreneurs. The Vieremä factory has expanded from 300 m2 to four hectares, but our mission remains the same – to contribute to our customers’ success with productive and reliable PONSSE forest machines and services.

PONSSE forest machines are based on environmentally friendly cut-to-length (CTL) logging, where trees are felled, delimbed and cut into various log assortments before they leave the forest. Our product range covers all size categories of forest machines, from first thinning and the harvesting of forest energy to heavy-duty regeneration felling, as well as all logging sites, from soft soil to steep slopes. PONSSE products and their key components are designed and manufactured by Ponsse in Vieremä. This guarantees that we remain at the forefront of development and that our products meet the requirements of forest professionals.

A good product range and confidential customer relationships are Ponsse’s foundation stones, together with its strong values, committed personnel, as well as history and traditions. We continue to follow the path cleared by Einari: “We manufacture the best forest machines in the world.”