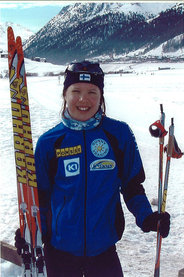 A member of the Finnish National A Team, Kerttu Niskanen has already accumulated several World Cup starts during the past few years. Through experience, she has also improved her results.

At present, competition in the national team is tough – a fact that motivates Kerttu to train even harder.
"The national team now includes seven women who are competing for a chance to participate in the World Cup races. You have to work very hard throughout the season to earn your place in the Cup events."